A vast ancient temple complex founded in the 12th century by the Khmer empire, spread across hectares of Cambodian countryside. The city’s structures are stunning in both size, and the level of intricate detail carved into their stone walls. Angkor Wat, it’s most famed building, is one of the largest religious monuments both on the site and in the world. While Angkor Wat has remained in use throughout the centuries, many of the sites buildings were abandoned and nature took over, resulting in a spectacle of giant trees bursting through buildings and wrapping them in roots. It’s time to get your Tomb Raider on!

If you have no interest in seeing ancient ruined temples, best to give it a miss.

You can spend one to several days visiting the many monuments depending on how much time you have and want to spend there. There are many possible itineraries to do this and a few ways of how you get around, many people make the most of the 3 day pass. One option is to hire a tuk-tuk driver or bicycle and use our guide to give you the core info. Just letting your eyes feast on the visible splendour of the place. You could visit the Angkor Museum before going on your tour if you want to have a better understanding of what you will see. Another option is to go on a guided tuk-tuk or bicycle tour. We’ve covered itineraries for varying times, transport options and routes, plus information on the two classic circuits you will hear mentioned, the small and big circuit.

Angkor attracts over 2 million visitors a year and at certain times of the day, some parts of the park are descended upon by coach loads of tourists. So we have also included crowd avoidance tips in the guides.

The Angkor complex covers over 160sq km and has over 100 incredible monuments, all built by the mighty Khmer empire, in a testimony to the empire's immense power, wealth, impressive art and architecture. The main temple area consists of Angkor Wat, less than 2km north is the south gate to the huge walled city of Angkor Thom. The most enduring and last capital of the Khmer empire, its walls are roughly 3km x 3km long, 8 metres high and its 9sq km area is believed to have sustained a population of 80-150 thousand people. Within Angkor Thom's walls are several key monuments including Bayon at its centre, the awe-inspiring temple with its many several meter high towers of stone faces. Other famous structures include the 350 metres long Terrace of Elephants, and the royal palace that includes a sandstone pyramid, the highest scalable structure in the complex. Angkor Thom is flanked by two giant man-made rectangular reservoirs (baray), on its east and west side. Just past the north wall is the walled city of Preah Khan, and 1km outside the east wall is Ta Prohm (Tomb Raider temple). Both functioned as a Buddhist monastery and university and are now famous for the giant trees growing on top of the temples, with massive roots wrapped around the stone buildings like tentacles. There are also superb temples further afield such as Banteay Seri, it has some of the finest stone carvings of anywhere on earth! To the east is the collapsed temple Beng Mealea, great fun to clamber through the jungle ravaged ruins. 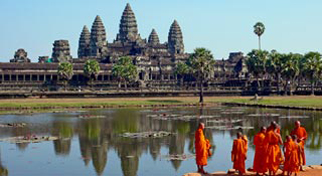 Mother of all ancient temples, the biggest religious monument in the world 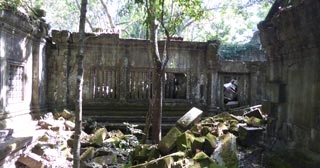 Huge half collapsed temple ravaged by the forest, the Indiana Jones experience 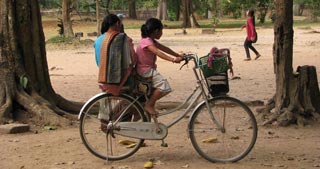 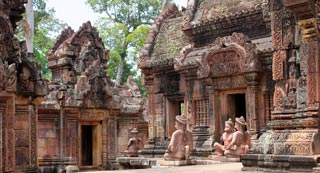 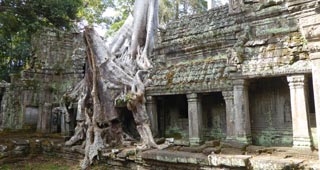 A run down of all the major temples & structures 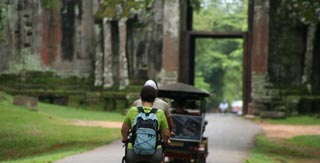 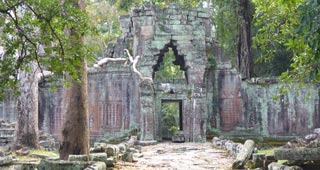 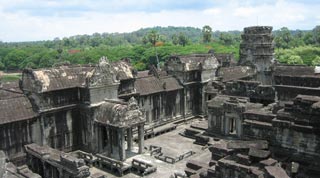 Itineraries for Half & Full Day 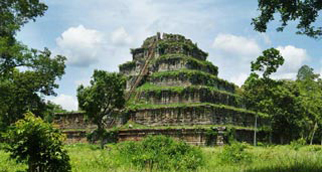 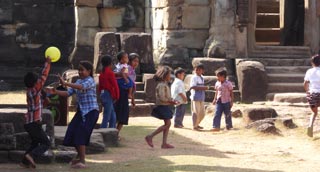 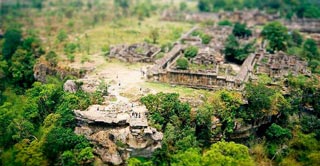 Ancient temple in a spectacular setting on top a cliff 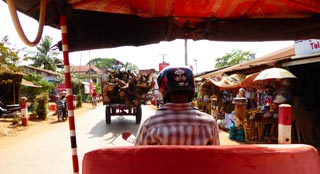 All the self-guided and guided tour info you need 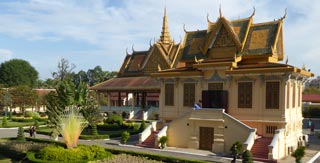