The now legendary Ko Pha Ngan Full Moon parties at Haad Rin Beach have their roots back in the mid-80's when the locals held a party to give thanks to the 20-30 tourists who visited the island. By word of mouth, the numbers attending the parties rapidly expanded and in recent years these world famous parties, attract between 10,000 to 20,000 revellers. At New Year, the numbers can exceed a beach bursting 30,000! The success of the Full Moon parties has led to the creation of Half Moon, Quarter Moon, Black Moon, Shiva Moon and a host of other excuses for all night raves. But at present, these additional parties have been banned by the military government, and even the long-term future of the Full Moon Party is in doubt. In the meantime, almost the entire community of Haad Rin is geared up to provide you with a madcap, hedonistic night of drinking, dancing, and just full-on partying. All the pubs, clubs, beach bars and restaurants in Haad Rin stay open till dawn, and everywhere is jam-packed with a heady amalgam of people looking to party - Europeans, as well as Thais.

Fluorescent T-shirts, UV body paint, and all manner of bizarre masks and costumes, such as animals, skeletons, loincloths and the like are out in force. Lots of skimpily clad bodies adds to the visual excitement. Sound systems blast out from the many venues: psytrance, RnB, hip-hop, rock, house, garage, reggae and electronic all getting airplay. Strobes and spotlights light up the sky, as well as technicoloured explosions from the non-stop firework displays. Wander or weave your way along the beach by the water's edge, or walk at the top of the beach from bar to bar, as you alternate your bottles of beer with cheap buckets – which consist of a kids beach bucket, a bottle of M150 (a potent Thai version of Red Bull), a can of soda mixer and a bottle of local rum/vodka/whisky. From experience, avoid the local vodka (aka hangover water) unless you really can’t stand the other options! In between these two walking routes lies a great seething mass of humanity on the sand. There’s always drunken limbo dancing on offer, with many fire shows, juggling and various performers around to entertain. Vendors will try to sell their booze buckets to you for 400B-600B, a standard price away from the beach is 200B, so be prepared to haggle. If this is all sounding good to you, it’s likely to be one of the most epic party nights of your life!

It is a fun-filled, non-violent atmosphere, and it is only after around 2am, when well over half the party has left, that things can start to feel edgier. This is when some extremely drunken young guys start to lose control, or thieves and muggers choose to pray on those too wasted to defend themselves. A favourite place to escape to is Mushroom Mountain, a bar and dance floor set over the rocks at the northern end of the beach, famous for its mushroom shakes. It offers a wonderful view of the entire Full Moon scene from a safe distance. Full Moon parties can provide you with an unforgettable and fun experience, and while over the years, there have been many reports of people getting arrested, robbed, mugged, severely beaten up, raped and even killed, the following tips should help ensure a good night:

- If you plan to stay on the island, make sure you book your accommodation in advance, but note that most places have a 3-4 day minimum over the period of New Moon. Also note that you can stay at just about any beach on the island, as they all provide organised transport, to and from the party at Haad Rin. - Safely lock all your valuables up back at your accommodation. If you have a safe, use it. If not hide your valuables well in your room. Unfortunately, it’s not uncommon for rooms to get ransacked when the FMP is on.

- The buckets are strong and can go down quickly. A classic fail is to get too wasted early on and miss the fun, either passed out or heaving your guts out. Pace yourself. - If you want to save some cash you can buy your booze and body paint from a local supermarket away from the beach to bring with you. - Bring plenty of water to keep yourself well hydrated in the heat. The hangover will likely be horrendous if you don’t.

- Don’t bring any drugs with you on to the island; trafficking still carries the death sentence in Thailand. Technically all drugs, including marijuana, are strictly illegal, and you can be locked up for months as well as have to pay a lot of money in kickbacks before the police let you go. That said you will find bars on the island selling weed, happy shakes (mushrooms) and Nitrous Oxide (laughing gas). We haven't heard of any problems with the police for stuff bought and consumed at the bars, but this doesn’t mean we are liable if you do! The emphasis is on from the bars. - Be extremely wary of Thai’s elsewhere trying to sell you drugs, they could either be in cahoots with the police, or running a scam (very common). Either way, somebody 'busts' you and it doesn’t end well for you! - If you do decide to partake in the happy shakes, be advised they are potent. So share one and see how it goes. Probably not recommended to be in the chaos of the beach on one either. - Yahbah (translates as 'crazy drug') is methamphetamine, pretty nasty stuff. We’re not your mum, but best avoided. We’ve also seen MDMA advertised, but there would be big questions over what you’re actually getting. Cocaine doesn’t exist in Thailand, so if somebody is trying to sell you it, definitely don’t buy it!

- The burning skipping ropes have bad idea written all over them, but when hammered bad ideas can seem to become good ones. Following every full-moon party, you will see people with limbs and even faces bandaged up from burns. None are pleasant, some are extremely nasty and could ruin your stay. Something to keep in mind! - Wear protective footwear, and if you only have flip-flops, try securing them with duck-tape! There are cigarette butts and glass everywhere, and your feet can get badly cut - or burnt if you venture near the fire shows. - Never accept food or drink from strangers (pretend you’re aged 6). - Go with a friend (or friends) and try to stay together. If one of you has trouble or gets too drunk, the others can help out. Agree in advance on a place and time to meet up in case you become separated. - Aim to stay at least coherent. It’s not uncommon to see people in a state lead off by prostitutes or police. Or lone girls being ‘helped’ (difficult to decide the motive) by guys. - Keep the address and phone number (in Thai) of your accommodation with you. This piece of paper could be your ticket home if for some reason you are struggling to remember. - If you encounter a serious problem or need advice or help, look for the tourist police in their white bibs. They are independent of the local police. - If somebody is injured or needs to sleep and isn't going to make it home, head to the medical or safe sleep area halfway up the beach (near the Tommy resort). - Don’t swim in the sea – it’s a giant toilet and rubbish tip at these parties.

- Travel light and only bring enough money with you to last the night. Pick-pockets are about. Keep the money in something attached to your body if possible. It is tricky to estimate how much you might need, but between 2000B - 3000B should be plenty. - If you bring a phone or camera, again, keep them properly secured to your body at all times. - Don't bring any expensive jewellery with you or anything you can't afford to lose. - Only bring a COPY of your passport with you. Although the police may not always accept this in the event of trouble, it is still preferable to losing your passport or having it stolen. Stay safe and have an epic time! 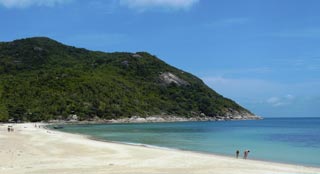 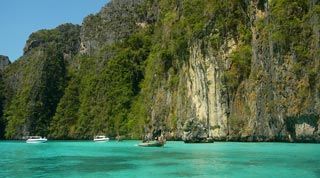 To truly appreciate some of Ko Pha Ngan's beauty, you need to get out on the sea 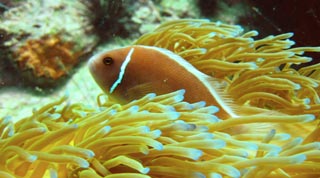 Some stunning dive and snorkelling sites around Ko Pha Ngan 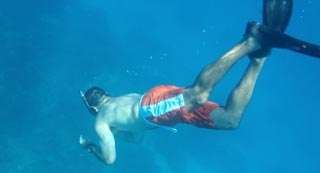 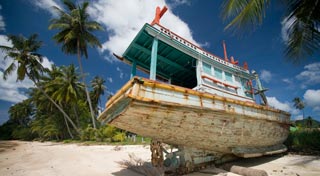 The island is a fisherman's dream, with so many ways to enjoy a day out fishing 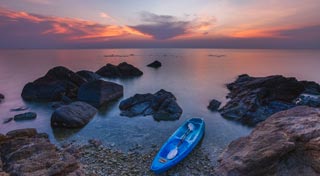 Explore the hidden coves and beaches around this beautiful island 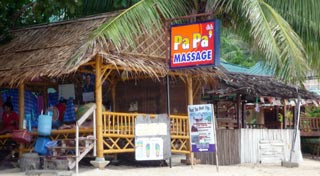 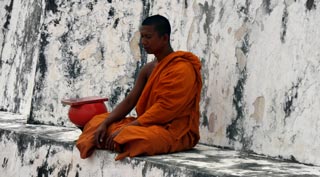 A 10-day meditation course in a peaceful, scenic setting that might change your life 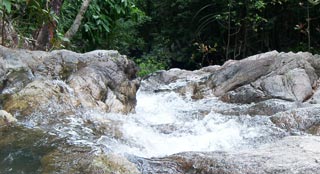 An easily accessible waterfall where you can take a refreshing swim 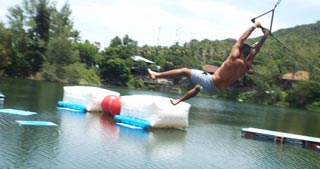 Challenge your physical dexterity as you launch yourself around this course 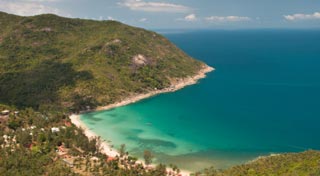 Trek through lush jungle & get spectacular views of the island 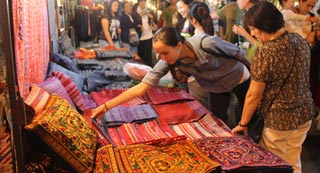 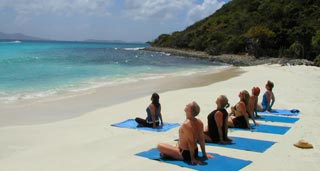 This spiritual island has attracted some impressive yoga retreats 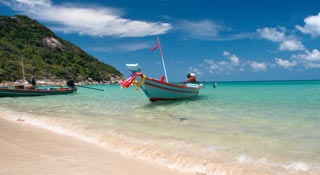 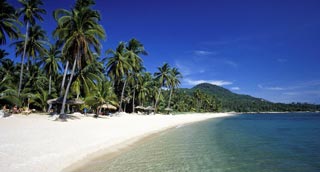 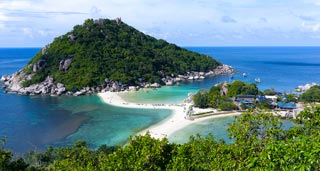