This area is arguably the nicest city in the east of Thailand to visit, and there is quite a bit to see and do both in the town and nearby. There’s a real mix of architectural styles, from Thailand’s largest Catholic Cathedral to a Thai-Chinese temple. The entire old-town area, including a superb gems market, is full of atmosphere and history and can be easily explored on foot. It’s the quintessential part of Chanthaburi and not to be missed.

Unless you are using this as a stop off on between Bangkok and one of the nearby islands or to Cambodia, Chanthaburi is probably not the kind of place you would make your way to visit especially.

In the city, you can visit the world-class precious stones district in the town centre on Si Chan Road. On Fridays, Saturdays and Sunday mornings, it attracts a large crowd of gem dealers and is well worth a visit. There are two road bridges and one footbridge crossing the Chanthaburi River which flows through the city. A small collection of bars and restaurants spreads along both banks of the river (in between the two road bridges) and is nice to wander around. The City Pillar and the King Taksin Shrine are on Tha Luang Road at the northern end of town, in front of the Taksin Military barracks. Opposite the shrine stands the ancient, former town hall which was erected during the reign of King Rama VI. Thailand's largest Catholic cathedral, the Cathedral of the Immaculate Conception, was built here in 1909 and stands on Chanthanimit Road, next to the riverbank – It’s difficult to miss! Worth a peek inside if you get a chance. Wat Kate Na Boonyaram, a Thai-Chinese temple, is in the centre of town, and a few hundred metres west of the Wat is the town's largest market, Talaat Nam Phu.

Here are some places of interest out of town, but not too far away, which are worth a few hours or even a day or more of your time. Wat Thong Thua is a temple, 4 km from town on the Sukhumvit Highway. It is the site of an ancient Bot, built in a Khmer style and there is a large collection of ancient Khmer sculptures. Nearby is the Muang Phaniat archaeological site, dating from the 7th-12th centuries, which contains the remains of Khmer religious sanctuaries and moats which mark the ancient town limits. Khlong Narai Waterfall is just 15km from the city centre; entry is free. Phliu Waterfall is 20km from town. Here is a large, 3-level waterfall with a pool where you can swim. There is also a small 'trail' through the jungle. Entry fee is 200B. Thok Nong Waterfall is around 35km from town. There are many pools to swim and a quiet area by the river to relax. Entry fee is 200B, and you can combine this visit with Phliu waterfall by using the same ticket. Namtokphlio National Park is 14km from town. There is a famous waterfall where you can swim and also enjoy a trek through the jungles and mountains. Hat Ao Yang is a small beach some 2km before Namtokphlio National Park. It's a nice shady beach and offers accommodation for visitors. Laem Singh Beach is a charming beach with a famous rock that is shaped like a lion. There is a beachside restaurant and you can take a boat from here over to Koh Chula island.

The city and province of the same name are mainly known for its tropical fruits - especially durians - its gemstones, its unspoilt fishing villages, its tranquil, sandy beaches, and high hills with verdant forests and scenic waterfalls. Also known as the "City Of The Moon", the city lies on the Chanthaburi River which runs into the Gulf of Thailand. There is much history here, and the town was once part of French Indochina. It was occupied by French military for 12 years in the late nineteenth century, and to this day, a significant minority of the citizens are of Vietnamese origin. You will also see evidence of Khmer, Mon, Chinese, Shan, Burmese and even French characteristics in the features of the locals. The same applies to the architecture in the ancient shop houses and Chinese temples that run alongside the Catholic cathedral that nestles on the riverbank. 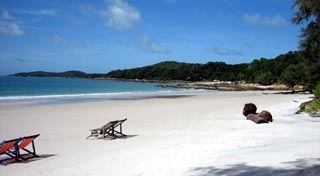 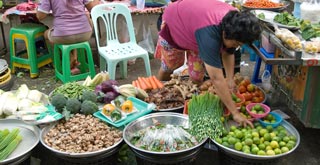