Koh Rong Samloem is a true gem of Cambodia, an unspoilt desert island paradise easily accessed by a 45 min speedboat from Sihanoukville. There are main beaches on three sides of the island, all backed by an interior of dense green, wildlife inhabited jungle. The beaches all have a different charm and appeal, but they all have a relaxing atmosphere.

If you want beautiful beaches but a bit more going on, then nearby Koh Rong’s Koh Tui (Koh Touch) beach might be more for you.

Saracen Bay, the eastern beach is usually the first stop of the speed boat, is wide 3km stretch of pristine white sand. There are a few different accommodation options scattered along the beach from basic shared dorms to swish private romantic bungalows. Day trippers from Sihanoukville stop at this beach, but there are nowhere near enough of them ever to make it feel too busy. You can make a 50min walk along one of 2 separate paths through the interior to the beaches on the west side. One path leads to Lazy Beach (and bungalows), the other to Sunset Beach (Huba-Huba Bungalows, Robinson Bungalows and Happa Garden Resort). Sunset Beach is the only place where you can fully see the sunset. The two beaches are not connected so to go between them you either need to go back to the east side to the other path, or hire a boat. On the northern side is the quaint, rustic fishing village of M'pay Bei, meaning 21 in Khmer. This is the second stop on the speedboat from Sihanoukville. In the village there are few great budget accommodation options, and it is just a short walk to the small but pretty much deserted beach. The place has managed to retain it's tiny village feel rather than a place just for tourists. The shanty feel and all that brings is part of its charm. At the very northern end, Sunset Bungalows have a pier you can go off for some great snorkelling. It is also as the name suggests, the best place on this side to watch the sunset, with just the final stage of sundown being eclipsed by the island.

Koh Rong Samloem is owned by the Cambodian Military and has been earmarked for development for quite some time. There's not much sign of anything happening or much clarity on what is going to be developed. So the best thing to do is go before it changes! There are NO ATMs on this island, Internet is pretty much non-existent. Hardly anywhere accepts card so come with enough cash to last you. Power on the island is all petrol generators and lights are out by 11:00pm. 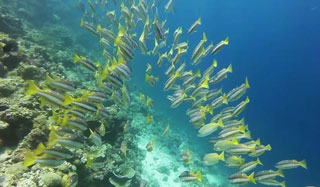 There is some good diving around the many islands 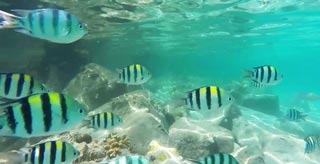 Beautiful clear waters from any beach 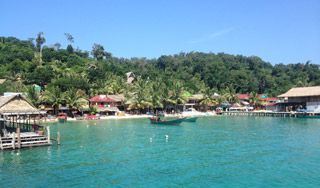 Koh Rong is a true gem, a Cambodian paradise island 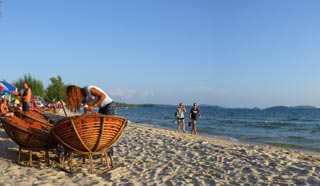 Party beaches to tranquil desert island paradises, it's all here