If you love a good old abandoned ghost town with an interesting war-torn history to browse around, this is for you! There are some superb nature trails and waterfalls around and the motorbike journey from Kampot is great fun (even for novice riders)!

In 2013 a new 4-star garish hotel and casino was built in the park. Tours from the new hotel can ruin the ghost town feel if they happen to be in a building at the same time. At the moment though it seems they only go to the old casino, which has been partly renovated/sanitised for said tours.

Bokor National Park (nearest to Kampot) is one of the country's largest protected areas, a dense tropical forest with diverse wildlife including Asian elephants, tigers, leopards, gibbons and pigs. Although the chances of seeing the big mammals is extremely slim near the main trails. The area is famed for the abandoned old French hill station ruins and the Popokvil Waterfall. The hill station sits at 1080m, and on a clear day gives fantastic views over the pristine forest, Thailand and apparently as far as Vietnam. Although the place is often shrouded in cloud and mist, but this gives a splendid eerie atmosphere to the abandoned hill station buildings. The hill station has several buildings including a catholic church, a hotel called Bokor Palace, post office and an old casino opposite the ranger building. The upside of the hotel is they laid a newly tarmacked road up to the hill station, meaning you can have an amazing ride cutting through the pristine forest on a motorbike from Kampot. There is a 2000 Riel fee for a motorbike and is recommended even for novice riders. From a trail about 1.5km down from the Hill Station, you can access Wat Sampov Pram (5 Boats Wat). The position of this wat near a cliff edge and commanding views over the surrounding area make this a must if you visit the area. If the views are cloaked in mist, it only adds to the feel of the place. There is also the ex-residence of King Sihanouk, the Black Palace or "Damnak Sla Khmao" ruins. It was built by brick and black wood in 1936. Situated just 10km down from the hill station and worth a visit, especially as it's en-route. Popokvil Waterfalls is a two-tiered waterfall best visited in the wet season (May to October) when the falls are their most beautiful and you can also have a swim. Popokvil means "swirling clouds" after the mists often seen swirling around the falls. The upper falls (14m high) are best to swim in. There is a signposted trail to the lower falls (18m high) from the upper falls. The falls are a 2km (15min walk) from the hill station or just visit on your way up/down. You can also do some treks around the park of varying lengths. If you want to do a longer trek, it's probably worth hiring a ranger for US$10+ depending on the length of the trek. If you are comfortable following a map, there is an 11km trail starting about 1.5km down from the main ruins leading past Wat Sampov Pram to Popokvil Falls (3 hours). Before embarking on any treks around here check in at the Ranger station first and be back well before dusk. *TIP* - It can be much cooler up the mountain and sometimes raining, so you may want to bring some warm clothes and waterproof anything you don't want to get wet.

This is a day-tripper from Kampot.

The Hill Station was built by the French in the 1920s and after being shut down in the 1970s became a communist guerrilla base. Later occupied by the Khmer Rouge the buildings show scars of their war-torn past but are in good condition to walk around. The hills are long free of any guerrilla activity and are claimed to be landmine free, but as always in Cambodia best to stay on the paths! 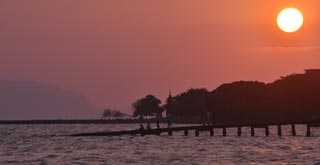